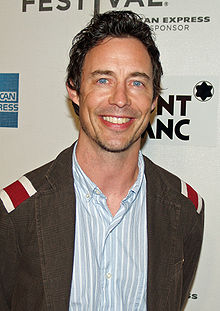 Cavanagh was born in Ottawa, Ontario. He is of Irish descent and was raised in a large Roman Catholic family.[1] [2] Cavanagh moved with his family to Winneba, a small city in Ghana,Plantilla:Cn when he was seven years old. In his teens, the family moved to Lennoxville, Quebec where he started high school. He attended the Seminaire de Sherbrooke, where he studied in French and played basketball for the Barons. He later studied at Champlain College in Lennoxville at the CEGEP level.

Cavanagh is fluently bilingual in French and English. While attending Queen's University in Kingston, Ontario, he became interested in theatre and music and played ice hockey and varsity basketball. He graduated with degrees in English and biology.

Cavanagh has been an actor in his native Canada for many years on television dramas such as Jake and the Kid, and television commercials, appearing for Labatt in the 1990s and more recently for CIBC.

In 1989 he was cast in the Broadway revival of Shenandoah. Other stage credits include productions of A Chorus Line, Cabaret, Brighton Beach Memoirs, Urinetown and Grease. He appeared in Some Americans Abroad at Second Stage Theatre in New York City.Plantilla:When

After gaining notice for his recurring role as Dog Boy in the NBC television program Providence, Cavanagh was cast as the protagonist and title character in the NBC program Ed. He is still best known for his Ed role. Cavanagh received a Golden Globe nomination and a TV Guide Award for his work on Ed, which ran for four seasons beginning in October 2000 and concluding in February 2004.[3] In 2010, he started a podcast, Mike and Tom Eat Snacks with his Ed castmate Michael Ian Black.

Cavanagh first guest starred on the sitcom Scrubs in 2002 ("My Big Brother"). He was hired to play Dan Dorian, the brother of lead character J.D. (Zach Braff), because of his resemblance to Braff. He returned for one episode in 2003 ("My Brother, Where Art Thou?"), for a two-episode arc in 2004 ("My Cake" and "My Common Enemy"), for one episode in April 2006 ("My New Suit") and most recently on November 8, 2007 ("My Inconvenient Truth"). He took the role for one last time in Braff's final episode as a series regular, the eighth season finale ("My Finale").

In 2005, Cavanagh filmed a pilot, Love Monkey, with Jason Priestley, Judy Greer, and Larenz Tate. The show was selected by CBS as a midseason replacement and debuted on January 17, 2006. Love Monkey was given an eight-episode order, but only three aired on CBS before the show was placed on indefinite hiatus due to low ratings. VH1 bought all eight episodes and played them in their entirety in the spring of 2006. In 2009 and 2010, the series was shown on the Universal HD cable network.Plantilla:Citation needed

He starred in the Lifetime Movie Network television miniseries The Capture Of The Green River Killer in which he portrayed King County sheriff David Reichert. In March 2006, Cavanagh filmed My Ex-Life, a comedy pilot for CBS about a divorced couple who remain friends. The pilot featured Lost actress Cynthia Watros as his ex-wife. However, CBS did not select the show for its fall 2006 schedule. Cavanagh portrayed the lead role Nick Snowden (the heir to the Santa Claus identity) in the made-for-TV movie Snow in 2005, which is now shown annually on the Family Channel.

In 2008 Cavanagh appeared in the short-lived ABC series, Eli Stone, playing the father of the title character. Beginning in January 2009, Cavanagh starred in the new television drama Trust Me, co-starring Eric McCormack, which aired weekly on TNT[4] until it was canceled.[5]

Cavanagh stars in Stories from the Vaults on Smithsonian Networks; its second season premiered July 12, 2009.

He had a guest appearance in the mid-season premiere of the USA Network show Royal Pains as professional golfer Jack O'Malley.

Prior to Ed, Cavanagh's film appearances were mainly in supporting roles.[3] After that series ended, he had his first starring role as an escaped convict in the thriller Heart of the Storm. In 2005, he starred in the romantic comedy Alchemy, opposite Sarah Chalke; in 2006, he appeared in another romantic comedy, Gray Matters, opposite Heather Graham, and in a family comedy/drama, Two Weeks, with Sally Field.

In 2006, Cavanagh began filming Breakfast with Scot, in which he plays a gay retired hockey player who becomes an adoptive father to a young boy. The film, released in 2007, drew attention as the first gay-themed film ever to win approval from a major league sports franchise to use its real name and logo; Cavanagh's character formerly played for the Toronto Maple Leafs. In 2007 he starred in the second installment of the direct-to-DVD Raw Feed horror film series from Warner Home Video, Sublime. He most recently starred as Ranger Smith in the feature film Yogi Bear (2010).

Cavanagh has an older brother who is a Crown Attorney and three sisters. One of his sisters teaches Religious Education (RE) and is a chaplain in Ontario; another is an autism specialist in Toronto, and a third sister is a London-based writer.

Cavanagh is married to Maureen Grise, a photo editor for Sports Illustrated. They married on July 31, 2004, in a Roman Catholic ceremony on Nantucket, Massachusetts.[6] The couple have a daughter and two sons.[7] Cavanagh ran the 2006 New York City Marathon, finishing in 3:29:31.[8]

In the summer of 2008 he founded the Cavanagh Classic, an annual celebrity basketball tournament in Rucker Park in Harlem, New York City to raise money and awareness for Nothing But Nets. The charity's goal is to combat malaria by sending mosquito nets to families that need them. Cavanagh traveled to Rwanda on a March 2009 United Nations Foundation trip to distribute the nets and educate the recipients in their use.[9]

We are using cookies for the best presentation of our site. Continuing to use this site, you agree with this.